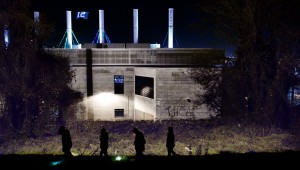 This is the second in a sequence of posts spotlighting the experiences and takeaways of some of our One Night Count volunteers.

The One Night Count is a snapshot of the number of people who are homeless outside. Overnight Thursday – Friday, January 23-24, hundreds of volunteers from across King County showed up to help with the One Night Count at headquarters in Seattle, Shoreline, Bellevue, Auburn, Federal Way, Kent, White Center, the University District, and Renton. This year, in the wee morning hours from 2-5 a.m. volunteers documented 3,123 people trying to make it through a winter night outside, while shelters were full.

While volunteers share the same mission during the Count and a common vision of our community without homelessness, each volunteer has their own unique story. Keep coming back to hear more of their stories.

This moving and powerful story was written by Kahla B-K, a first-time counter who is interning at Solid Ground, and was originally posted on Solid Ground’s blog. Kahla has graciously given us permission to re-post it here for you all to read. Here are her words:

As we gathered in the wee hours of Friday, January 24 at the Compass Housing Alliance for our initial One Night Count volunteer briefing, I thanked the twinkling stars above it wasn’t raining. Over 800 of us would spread out across King County to search for and count people sleeping outside without shelter. The One Night Count (organized by the Seattle/King County Coalition on Homelessness) would be a snapshot of homelessness between the hours of 2 and 5am.

As the count began, my team and I quietly weaved our way around the streetlamp-lit areas first, peeking into parked cars and doorways. There was no one in sight. It seemed as if everyone else in the world had vanished. That feeling was probably what allowed me to peer into the dark gaps between dumpsters, or make my way into the spaces between buildings I would never, under normal circumstances, walk into at night. The mood was warm – light, like the glow from the lamps overhead. But that would change.

The cold reality
As the condensation slowly turned to frost, the warmth I had felt was replaced with a shiver. A large park was last on our map to check. We had been told before setting out that we would likely find people here; people really do come to this park to sleep. I was fearful; beyond the reach of the sentinel streetlights, the shadowed expanse behind the vine-choked fence was eerie and unnerving.

It’s one thing to think about the experience of homelessness while warm and safe in bed, but actually going to places where people without homes might sleep was entirely different. I couldn’t imagine having to decide where to sleep each night, let alone the circumstances that would lead me to believe that entering a dark park – without a flashlight – was the best option. What I felt was probably only a glimpse of the fear people experiencing homelessness deal with every day.

We found no one sleeping in the park, however – perhaps we just couldn’t see them. As we ended our search and began our walk back to our group’s meeting spot, we admitted how relieved we were to have a zero tally. That’s when we met John (name changed for privacy).

A face of homelessness
I knew immediately when I saw him that he was homeless. No one, if they could help it, would be out wearing only a thin hoodie and track pants. He threw a smile our way then politely asked us who we were with – noting the bright yellow “volunteer” stickers plastered all over our clothes. A member of our group explained what we were doing out so late at night. John paused and looked down, and then said that he, too, was without a home.

He told us his story and of the complications preventing him from getting the help he needed. All the problems he recounted wove perfectly into the pattern of homelessness – all the issues that agencies like ours are fighting to dismantle. As we talked, he shivered uncontrollably, so strongly at one point he almost lost his balance. And then, diplomatically, he asked if us if there was anything we could do to help.

My coworker and I locked eyes; no words were needed to express how we felt. We had nothing to offer at that moment. If we felt helpless, John’s feelings of utter hopelessness must have been overwhelming. Indeed, he started to sob for a moment in the crook of his arm, hiding his face so we couldn’t see. With tears still caught in the lines under his eyes, he explained his medical condition and the barriers he’s faced seeking treatment.

Clearly suffering from the cold, he said he needed to go to the hospital and asked if we could call 9-1-1, so we did. Fearful of what might have happened to him if we hadn’t been there to call for help, I was suddenly grateful for the icy phone I squeezed in my pocket. He asked us to stay with him until the ambulance arrived. He was still shaking and having trouble standing, so we walked over to the stairs behind us so he could sit. We continued to talk – about his childhood and how he got his name – named after his father’s wartime buddy. He made jokes about what it was like fighting for bathroom time in a house with four sisters.

A human connection
When the fire truck pulled up, he held out his hand to me to shake as he thanked us. He did not let go, but held my hand as he continued to talk on, not wanting us to leave. I didn’t try to pull away. How long had it been since he was able to just talk to someone – for someone to listen? How long since he was comforted by another person’s touch? No, I wouldn’t let go until he did – or until the paramedics made me, which is what happened.

We didn’t wait to see if they would take John somewhere or leave him; after touching base with our whole group, we went our separate ways. And as I drove by on my way home, John was gone. I hoped he was on his way to a warm bed.

The impact of that night lasted far longer than the cold that soaked into my bones after only three hours outside. I shivered the rest of the morning thinking about John and my experience participating in the One Night Count – my electric blanket turned all the way up. Two pairs of socks, two sweaters, a hoodie, and two pairs of pants weren’t enough to warm me – inside or out. While the experience of homelessness is impossible to understand in just a few hours’ time, I came away with a very important lesson that I keep reminding myself of: Be grateful for all that I have – not just a warm bed or a cell phone, but a loved one’s open ears and caring embrace.

If you are interested in getting involved or would like more information on the One Night Count, please visit: www.homelessinfo.org.