Yesterday, I had a great time as one of hundreds of advocates who joined the Children’s Alliance for 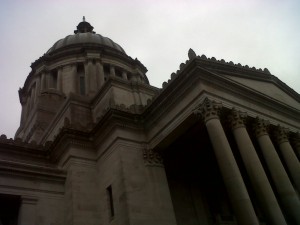 Have a Heart for Kids Advocacy Day in Olympia. The marble halls of Olympia are usually filled with the low, booming voices of adults, but yesterday the Capitol was filled with the squeals of excited kids running around. Samantha Kersul, Legislative Aide to Senator Frockt (my senator in the 46th Legislative District!) told me, it was a nice change to have kids around the Capitol.

Before going to meet with our legislators, we marched to the Capitol and held a rally.  At the 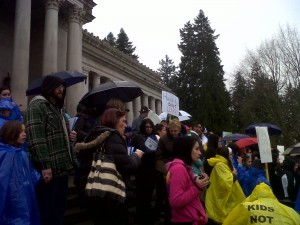 rally, a young girl gave the opening remarks. She called to action all the adults in the audience: “as kids we need the help of adults to get a good start in life.  We need you to help fight for us.”  She is exactly right: if we as adults don’t fight for the kids of our state, they will not have a fair chance at a future.  It was a truly amazing and inspiring speech.

Next, Governor Inslee began his speech with a reference to a photo of a 4-year-old child sleeping on a bench that was captured during the homeless point-in-time count in Olympia and published in the local paper.  Moved by this picture, Inslee stated, “I am governor of this state and we should not be a state where a 4-year-old does not have a place to sleep at night.”  He spoke about how important it is that we give the kids of our state a fair chance at a good start and a promising future. He spoke about the exciting prospects of the McCleary decision and the possible benefits it could bring to our state, but he also had a warning that he wanted us to pass onto our legislators: “It is not a solution to our educational crisis to create a homelessness, nutrition and health care crisis for our kids” by not funding important state programs.  Governor Inslee’s passionate support of the reasons we were all there strengthened our drive and inspiration as we headed out to meet with our legislators and advocate for kids!

I had called ahead to set up meetings with two of my legislators from the 46th legislative district, Representative 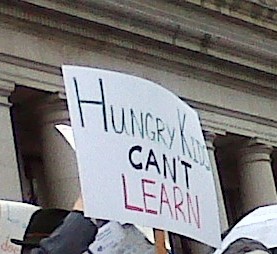 Pollet and Senator Frockt, and a meeting with Representative Farrell’s Legislative Aide. I spoke with all of them about one of the Coalition on Homelessness’ key funding priorities, restoring the 15% cuts in already-too-small TANF benefits to families with children.  I also asked them to fund State Food Assistance, and to help pass one of the Children’s Alliance’s priority bills,  the Dental Access Bill (SB5433/HB1516).

Why did I pick these bills to talk about with my elected officials?   It’s simple: if a child is hungry, she can’t learn, and if a child is sitting in class in pain with a cavity, he can’t learn either.  If families can’t cover the basics of rent, food,  utilities, transportation, and clothes, kids will suffer.  Jenn Estroff, the Governmental Relations Director with the Children’s Alliance said it well: even if the legislature makes sure that all of our schools have great teachers and the best equipment possible, as long as our kids are still sitting in class hungry or in pain, none of those investments will be worth it.

Having hundreds of parents and children at Have a Heart for Kids Day served as a reminder to the legislators that they are not only voting for those who have the power to vote for them now, but they are voting for the future of every single one of Washington’s citizens.  I can hardly wait to head back to Olympia on February 11 for Housing & Homelessness Advocacy Day!  I’m going to help make sure that every legislator from King County gets one of our special buttons highlighting the results of the Coalition’s 2013 One Night Count,  and excerpts from the powerful comments people have written on the hundreds of advocacy postcards we’re collecting. See you there!