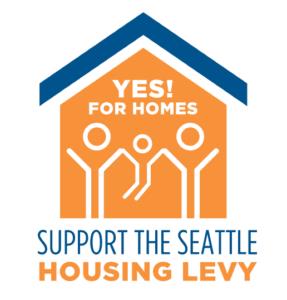 Vote YES on Prop. 1: YES for Homes!  It’s the last item on your ballot, but the most important!

The Housing Levy is the single most important source of funding for affordable housing in Seattle. Your YES vote renews the levy for another 7 years. See www.yesforhomes.com for more information. (the campaign needs your help and you can sign up online to volunteer!)

Ballots can either be mailed in (with first-class stamp, postmarked by Tuesday, August 2), or dropped off at a Ballot Drop Box by 8 p.m on Tuesday, August 2. Drop boxes are open 24 hours/day.